What is PTSD? How does Stellate Ganglion Block work?

Post-Traumatic Stress Disorder (PTSD) develops in response to being exposed to extreme stress, serious injury, and/or sexual trauma. The symptoms of PTSD present themselves as an assortment of psychiatric conditions: Nightmares, severe anxiety, insomnia, hyper-vigilance and over reactivity being the most pronounced. The sympathetic nervous system (“fight or flight”) has been long known to play a part in PTSD. It is believed that extra nerves of this system sprout or grow after extreme trauma leading to elevated levels of norepinephrine (anadrenaline-like substance) which, in turn, over activates the amygdala (the fear center of the brain). This chain of events results in PTSD symptoms that may persist for years.

A recent innovation offers potential in rapidly treating symptoms of PTSD for a prolonged period of time. Placing an anesthetic agent on the stellate ganglion, in a procedure called Stellate Ganglion Block (SGB) can relieve the symptoms of PTSD in as little as 30 minutes and last for years. SGB “reboots” the sympathetic nervous system to its pre-trauma state, similar to a computer reboot. In the brain, norepinephrine levels are rapidly reduced and the extra nerve growth is removed. SGB is an anesthetic procedure that has been performed for many years and is considered a low risk pain procedure done under x-ray guidance.

Research results have been impressive. Incumbent PTSD treatments can take from months to years to work with success rates of under 40%. Overall SGB success rates have averaged 70-75% over the first nine years of use. In collaboration with neuroscientists and clinical observations, the author has modified the SGB procedure, resulting in current success rates in the 85 to 90% range.

Patients do best when they adhere to a proper regimen of after care under the supervision of psychiatric professionals. CBT (Cognitive Behavioral Therapy), reduction or elimination of psychiatric medications, and meditation are commonly recommended. Reappearance of symptoms can occur if other trauma(s) are inflicted after SGB, if the patient is genetically predisposed to be sensitive to stress, or if the patient does not comply with the after-care protocol. Should symptoms reappear, then another SGB is likely to alleviate them.

SGB is not a cure for PTSD, however it is a highly effective, well tolerated, fast acting, inexpensive biologic technique that provides prolonged relief from the debilitating symptoms of PTSD. It will likely become a large part of the solution for patients with PTSD which include veterans, victims of sexual assault, first responders, and victims of crime and others.

The first living Marine to win the nation’s highest combat decoration since Vietnam was able to have his PTSD symptoms greatly eased. But the experimental treatment Medal of Honor winner Sgt. Dakota Meyer received is only available in 12 of  the 172 VA hospitals. Retired Army General Donald Bolduc, who also benefited from stellate ganglion block therapy, is calling for the procedure to be made a part of all PTSD treatments. He speaks to Bill Whitaker for a report about SGB on the next edition of 60 Minutes, Sunday June 16 at 7 p.m. ET/PT on CBS.

The numbers of soldiers and veterans suffering from PTSD is the highest ever after 18 continuous years of war. Despite the billions the U.S. Military has spent on PTSD, only about 40 percent of its sufferers find any relief. Bolduc, a former Green Beret and the only senior officer to admit having PTSD while on active duty, wants to change that. “There’s enough evidence out there that this is a valid therapy and its something that works.” He says that after his wife confronted him about his PTSD he received an SGB. “It was magnificent. Everything was crisper and clearer,” he tells Whitaker.

The procedure, commonly used since the 1920s for treating chronic pain, consists of injecting a local anesthetic into a cluster of nerves deep in the neck called the stellate ganglion. Dr. Michael Alkire of the Long Beach, California, VA is studying how SGB works by pinpointing the changes in the parts of the brain affected by PTSD. He says 80 percent of his SGB patients had relief from depression and suicidal thoughts. He was shocked at first, “Because there’s very few things in medicine that work that quickly,” he says. When Whitaker characterizes SGB as “rebooting” the veterans’ brains, Dr. Alkire responds, “A very good way to think of it.”

The effects of SGB can last up to six months, for some even longer. SGB is not a cure, but for PTSD sufferers like Iraq War veteran Henry Coto, it helped when nothing else did.

Coto blames PTSD for the failure of his marriage and the loss of his friends. SGB was a last resort when other treatments, such as anti-depressants and talk therapy failed. He says he felt better in two minutes. “I can’t control my smile… it’s like a big weight was lifted off my shoulders and my chest and I can actually relax.”

The Army is now funding the first clinical trial of SGB. Says Bolduc, “I think [SGB is] hugely important and it needs to be an intervention that’s part of every post-traumatic stress therapy.” 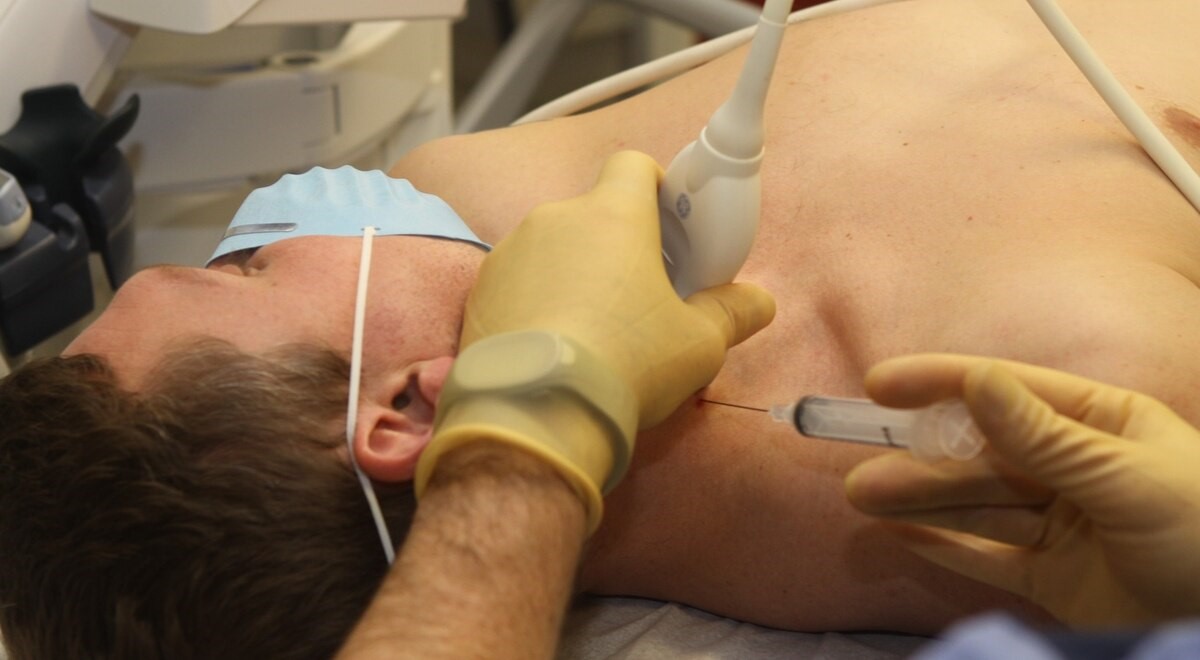 A therapy for post-traumatic stress disorder that some doctors believe will “revolutionize the way PTSD is handled” was the subject of a recent “60 Minutes” report featuring a number of afflicted veterans, including one Medal of Honor recipient.

The breakthrough treatment, called stellate ganglion block, or SGB, has been shown to significantly diminish various symptoms of PTSD, such as depression, anxiety, and insomnia.

By injecting an anesthetic that numbs a bundle of nerves at the base of the neck, the SGB treatment dulls the area that serves as the body’s “fight or flight” response transmitter, providing instantaneous relief from some of the epidemic’s most chronic symptoms.

The shot, which was initially used to treat women experiencing menopausal hot flashes, is meticulously administered using ultrasound imagery to track the injection’s precision. Its results, meanwhile, are almost immediate and can last for months.

“I feel like a million pounds was taken off me,” Medal of Honor recipient and Marine veteran Dakota Meyer told “60 Minutes” immediately after being administered one of the shots.

“The best analogy I got for you is, like, if you took from being downtown New York City in rush hour traffic to, all of a sudden, driving down a quiet country road with nowhere to be.”

Meyer was in Kunar Province, Afghanistan, in September 2009, when a patrol he was providing security for was ambushed by more than 50 enemy fighters.

Realizing the team’s exit had been cut off, Meyer made five trips into the ambush zone over a period of six hours, braving walls of enemy fire each time to save as many pinned down personnel as he could.

“He would tell us that he was not able to get the war out of his head,” 60 Minutes correspondent Bill Whitaker said of Meyer’s time since that hellish day.

“He brought it home with him. He was tense, he was anxious. He was quick to anger. He was losing his friends.”

But after receiving the injection by current doctor and former Navy SEAL Sean Mulvaney, a relieved Meyer felt “normal.”

Nearly 3 million service members like Meyer have deployed in support of American war operations since 2001. Of those who deployed to Iraq or Afghanistan, approximately 14 percent to 20 percent suffer from post-traumatic stress disorder.

And while SGB is not designed to get rid of memories associated with the trauma veterans have endured, it will significantly calm the way an afflicted individual responds to those thoughts. Thus, improving responsiveness to other forms of therapy, the “60 Minutes” study claimed.

Previous studies of small participant groups have backed up such proclamations.

In 2014, for example, a study in the “Military Medicine” journal found that just one week after the first SGB injection, nearly 80 percent of study participants experienced significant relief from PTSD symptoms.

Two years later, the Army received a $2 million grant from the Department of Defense to begin a randomized, three-year study to test the effects of the treatment on a group of 240 veterans afflicted by PTSD.